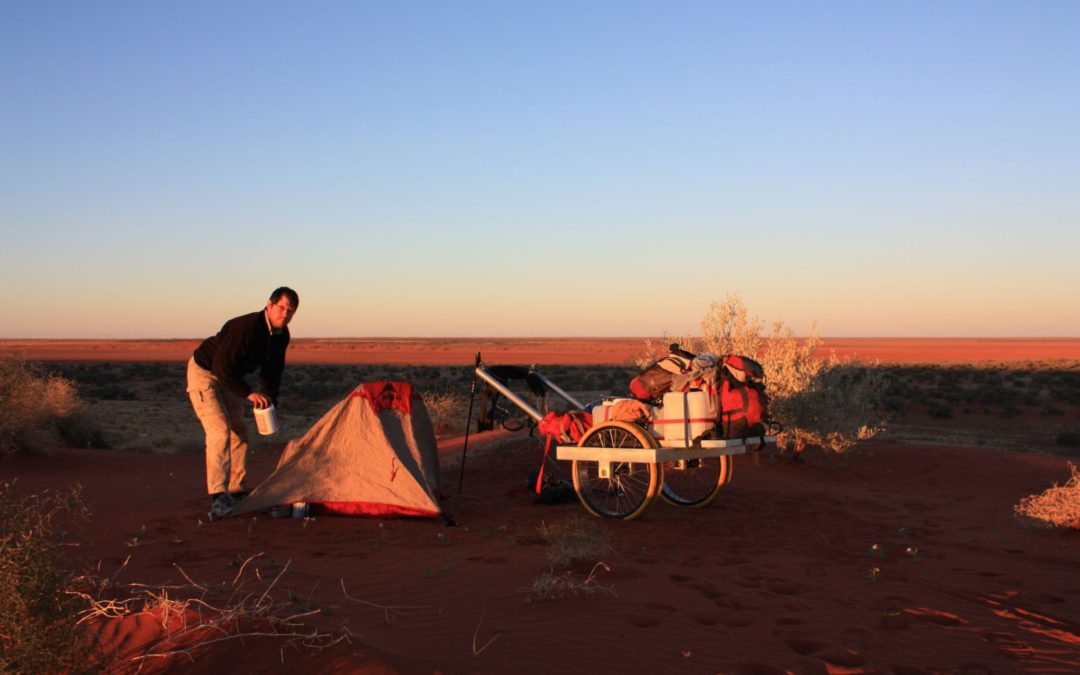 It takes something to be named European Adventurer of the Year. For Louis-Philippe Loncke, that something was travelling to Australia to make his second unsupported crossing of the formidable Simpson Desert. We caught up with Louis-Philippe and asked him to share his Australian travel tales, his inspirations, and his tips.

Have you always been adventurous? Who inspired you?

I’m from a rather modest family and my parents worked all the time so back in the early eighties there was no way to dream about things you didn’t know even existed. I had no one to inspire me then – so I never dreamt – but now I truly believe Australian Jon Muir is a model in the adventure world.

It all changed early 2000 when I started travelling solo and then in Australia in 2004 when I understood my potential.

Did you come from an adventurous family, go camping and hiking or have adventurous holidays?

Our holidays were more ‘rent a small apartment at the beach’ or visit museums. We didn’t really do outdoor activities.

What was your first adventure?

I had my first outdoor trips with the Scouts back in 1993 but a 6 day return cycling trip to Amsterdam was the first thing I planned. Not really adventurous – we never used that word and certainly not the word adventurer back then. Adventure is about taking rather big risks out of the ordinary. I did that in September 2006 [travelling Australia]. My first expedition.

The best experience is always the interaction with wild animals. The worst was after my expedition in Death Valley. I was in Las Vegas, about to get the bus to the airport. A young man pointed a gun at me and took my backpack containing all my film and most expensive equipment. Luckily another American (a police officer, he said) intervened. I then negotiated getting back my backpack for 10 dollars if the young man would leave and give back my belongings.

Those moments are very scary. Another scary moment was being chased by a pack of 14 camels for 3-4 minutes. Only one is necessary to kill me!

Most useless: Condoms – the idea was to build a raft but it didn’t work at all.

What’s the best piece of advice you’ve been given?  And did you take it?

Experienced mountaineers told me not go across a mountain range in Poland as it was too dangerous. They said I should go around it instead. Yes, I took the advice – they also told me a good alpinist is an alive alpinist.

How do you feel about travel tech?

I only have tech to keep me alive or document my journey, so I use photo cameras, 360 camera, satphone and solar panels, where the benefits outweigh the drawbacks (the weight). With other tech, like music, the issue is if you are used to it and your music device breaks you could break mentally too. Do expeditions without music.

You have had a few expeditions in Australia. What drew you to it – and how come you decided to cross the Simpson Desert?

I first visited Australia for the scuba diving, my first passion, on the Great Barrier Reef. I travelled inland Australia too, though, and loved it.

Only a few thousand people know what it’s like to cross the Simpson by car and the experiences it brings. Even fewer do it on foot, and as someone who loves human-powered adventures, I wanted to check this desert out.

Having crossed it once, why go back?  And how come you wanted to take people along with you this time?

In 2008, I wanted to reach a milestone location called Poeppel’s corner but in the end I skipped it. This time it was my main destination and I finally reached it. The new shorter route is less remote and safer in case of emergencies so it’s a good route for people who want to explore the Simpson Desert and have a massive adventure. It’s certainly more rewarding and less boring than a Himalayan climb where you spend most of your time waiting in your tent to acclimatise. In the desert you must always progress and be on the move.

What’s your motivation? Is it a personal challenge, to push yourself, or is it because you are doing something for the first time?

It’s all that combined. The first reason I go is to see a beautiful remote landscape. I could do that in a car but then I miss the full immersion experience and will learn nothing about myself, so I won’t grow as a person.

Having heard you speak at the Adventure Travel Show in London, I know that you are a funny and inspirational speaker. Do you enjoy sharing your expeditions as much as actually doing them?

Of course, I prefer to do the expeditions. I think I’ve done more expeditions than long talks actually. But in the coming years I’ll do the opposite. More talks and less expeditions, but longer ones.

Winning the award “European Adventurer of the Year 2016” will help to show what I do and I hope to tour in the UK in 10-20 cities. I’ve enough expeditions to do 3-4 different talks.

Finally, where to next?  And what’s on your bucket list?

There are still many deserts to be crossed unsupported. The Atacama is a very long one. A Frenchman did a very long crossing in 2015 but he walked for a third of the time on the sealed road and to me didn’t do the full length of the Atacama.

I also wanna go towards the cold now: a crossing of Iceland and ideally a winter crossing of Tasmania in August 2018. Louis-Philippe Loncke is an explorer, adventurer, project consultant, speaking coach and entrepreneur. His travel bug began in 2002 when he was sent to Singapore for work and started scuba diving. Two years later he began the first of his numerous Australian travels, walking 2000km and diving 100 times. Having completed 15+ expeditions, including two crossings of Australia’s Simpson Desert, Louis-Philippe was awarded “European Adventurer of the Year 2016”. When he’s not travelling he gives motivational speeches and presentations about his travel adventures.