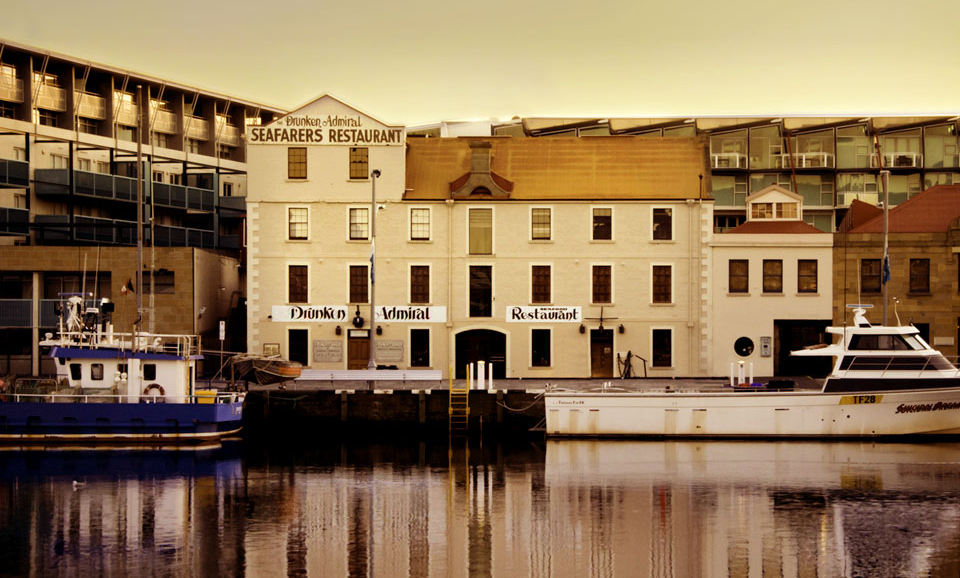 Liz Stark visits Tasmania for 2 days (in the rain), and finds there’s lots to do in Hobart – if you wrap up warm.

I feel a little torn as I write this post about my two days in Hobart, Tasmania. It probably didn’t help that I was REALLY excited to go. It also didn’t help that I visited in late May and it barely stopped raining the entire time.

I was travelling on my own, which was a bit miserable in a small city renowned for its dining and drinking options. Finally, having arrived in Australia in the height of summer, I am also currently totally unprepared for winter, and boy was it cold!

So – despite a fairly lengthy list of barriers – I had a good time in Hobart. I can’t quite stretch to great. My advice is that if, like me, you take advantage of the cheap winter flight offers then be sure to really rug up, go with at least one other foodie, and travel as late in the week as possible. It’s definitely a charmingly tiny city worth exploring.

MONA | having opened in January 2011, this unique gallery really is the jewel in Hobart’s crown. It was my primary reason to squeeze in a Tassie trip and two days in Hobart whilst in Australia.

Admittedly, I knew little more pre-visit than that MONA was unusual and worth seeing. I didn’t realise it is themed around the concept of death and built underground over three layers. MONA stands for the Museum of Old and New Art and is the personal collection of a local billionaire, funded by his gambling success.

I think anyone would struggle not to be impressed on some level. There’s confronting art, mind-blowing architecture, an outdoor concert venue and on-site winery. Seek out the slick bar three stories underground, Egyptian mummies and utilise personal digital guide ‘The O’. Better still, a 30 minute camouflage catamaran ride, with optional Posh Pit, picks you up and drops you off for $20 standard return.

NORTH HOBART | I loved this area about a 20 minute walk straight up Elizabeth Street away from the harbour and CBD. A trendy and buzzing little suburb offering a strip of restaurants, bars and cafes. Notable highlights for me were:

ALABAMA HOTEL | so happy I found this gem for my two days in Hobart and can’t recommend it highly enough to the budget traveller. The Alabama is pitched as a ’boutique budget hotel’ – this basically means your own private room but shared unisex bathrooms.

Whilst the sleeping arrangements were perfectly fine at $80 for a queen room, it’s the first floor common area that makes this place really special. With quirky vintage decor and consistently good tunes in the background, this was probably my favourite place to hang out in Hobart. The well-stocked bar was popular with hotel residents and locals alike, who tended to pop in after work for a drink.

FOOD SCENE | my issue was not finding somewhere to eat, but in fact quite the opposite. Unfortunately, there aren’t enough meals in the day (or money in my pocket) to try everywhere I wanted to with two days in Hobart. Plus I had no one to bully into sharing different dishes. Again some standouts for me were:

SALAMANCA | Hobart’s oldest and historic area really is rather beautiful. I enjoyed spending my second morning of two days in Hobart wandering around here, looking at the very British Portsea Place terraced houses and the cute cottages on Arthur Circus.

I also kicked off the day with a great choice of breakfast venue. Jackson and McRoss seems to be somewhat of an institution in the city, and I can see why. A traditional and very successful cafe with no skinny jeans in sight. The good value menu is solid, and their baked goods looked incredible.

FRANKLIN HARBOUR | another spot perfect for an hour or two of strolling. The harbour is full of modern (presumably renovated) piers and traditional fishing boats with wooden lobster pots. There’s also historic buildings such as the Henry Jones Art Hotel housed in an old jam factory and The Drunken Admiral Seafarers Restaurant. I particularly loved the floating fish and chip shops.

WINTER | brrrrrr it was so cold in late May! I think the trick is to just bring enough clothes rather than avoid winter altogether (and this was technically autumn). I have been to Tasmania before in June and it was fresh but sunny and beautiful then. This visit I was unlucky with the rain.

PILGRIM COFFEE | unfortunately this much raved about brunch venue gets a thumbs down from me. On my first morning – with many options to choose from – I hurried to Property: of Pilgrim (the two ventures share a kitchen and are connected in an L shape).

Disappointingly I found the waiter over-bearing, the menu uninspiring and the inflexibility to do poached eggs surprising. I was calorie counting though so maybe my choice was poor.

UGLY BUILDINGS | Hobart has some beautiful old buildings, notably in the Salamanca area and also in the CBD, such as Town Hall and The Mercury newspaper’s offices. It also has some real monstrosities! Talk about a juxtaposition of architectural design. Some of the jarring office towers would be better off knocked down…

SALAMANCA MARKETS | in order to secure the very cheapest of cheap flights, I flew from Melbourne on Wednesday afternoon and returned on a Friday evening plane at 19:40. As a result, despite two days in Hobart, I missed all of the weekend action and sometimes the streets seemed a little deserted. I’d really liked to have made it to the Salamanca street markets that have been running since 1974 with over 300 vendors.

AND KNOW THIS: By Australian standards, some Tasmanian locations are veritably old – The Bush Inn at New Norfolk (1825) is the oldest continually licensed public house; The Theatre Royal in Hobart is the oldest operative live theatre; Cascade Brewery in Hobart is Australia’s oldest brewery.

Liz Stark has been passionately exploring the world for over a decade, inspired by nineteenth century explorer, photographer and naturalist Isabella Baird. She even named her own blog after her: Fly Isabella.

Liz studiously seeks out the must-dos, the worth-a-looks and the don’t bothers in an effort to see everywhere worth seeing at least once during her lifetime. So far her travels have taken her to Thailand, Bali, Singapore, Sumatra, Cambodia, Laos and Vietnam. And, of course, we’re following her Australian travels avidly…