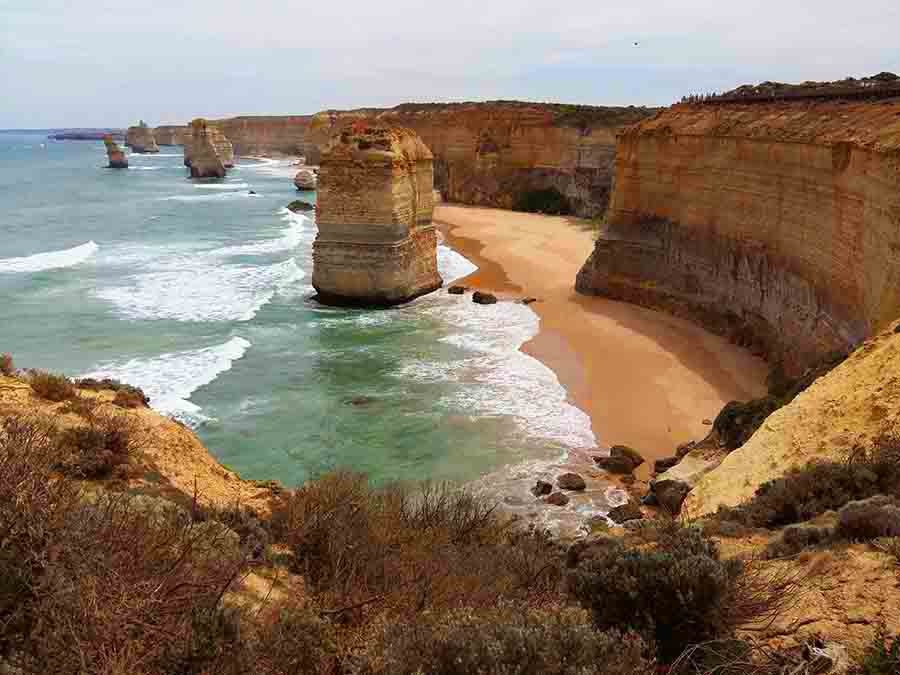 Ah, the Great Ocean Rd. If you’re travelling Australia it’s one of those absolutely must-do, can’t miss, top of the bucket list type of activities. Unless it’s raining. We’ve done it. And now Fly Isabella’s Liz Stark has done it too. Here’s what she found.

For some reason, even when I’m on holiday or travelling further afield like right now in Australia, the mention of ‘Road Trippppp!’ never fails to excite me. Perhaps because it’s a mini-break within a break? When I travel I’m on a pretty stringent budget: I couldn’t go away as much as I like to if I chose to stay in luxury hotels or dine out for every meal. So a road trip typically signifies good friends, good times, and a wee bit of a splurge!

When I lived in Australia 5 years ago myself and 6 girl friends embarked on a Great Ocean Road trip and it was hands down one of the best holidays I’ve ever been on. Totally stunning. So when I re-drove it with another friend, Emma, in January 2016 it had a lot to live up to!

THE DRIVE | I appreciate I’m stating the blimmin’ obvious, but honestly the drive is so impressive that you could opt to whizz down to Apollo Bay from Anglesea (outside of Melbourne) and return that same day with no significant stops and still be impressed. Subject to essential good weather that is…. My parents did a Great Ocean Road trip one summer accompanied by non-stop rain and mist – by no means unheard of in Australia – and could barely see over the dashboard.

APOLLO BAY | I toyed between this popular spot versus Lorne for a ‘must do’ on any Great Ocean Road trip. Apollo Bay won out due to its stunning secluded bay, quieter vibe, and authentic fishing heritage that’s still very much in existence. The main strip is a bit naff in places, however we stayed about 5 mins drive away from this at a fantastic Airbnb, which also added to the experience.

SOUTHSIDE BEACH | is a gorgeous spot, much closer to Geelong and Melbourne if you start your Great Ocean Road trip from the north. Point Addis seemed to be the best access point, and as a bonus offers its own incredible views up and down the rugged coast with its looming cliff faces. Southside was very popular with families and at the far end is also one of Victoria’s 4 nudie beaches. If that’s your thing.

Also check out: the 1km Koorie Cultural Trail, not for the ‘culture’ – which was a handful of faded Aboriginal information posts – but the outlook reward at the end.

LORNE | it’s not hard to see why Lorne is probably the most popular holiday spot along this ocean drive. Great beach, tick. Framed by beautiful pine trees, tick. Plethora of decent food and drink places, tick. We stayed at the highly recommended Grand Pacific Hotel a walk away from the main strip, with beautiful wraparound balcony and at a bargain price.

Also check out: by the GPH, both The Pier Seafood and Lorne Aquatic Club were buzzing.

SPLIT POINT LIGHTHOUSE | if you grew up in the 80s and watched Round the Twist then this should be an essential stop on your Great Ocean Road trip! Oh yeah, it’s THE lighthouse. From the telly show! The small town – Airley’s Inlet – is a lovely spot, although we didn’t stop and explore.

Also check out: just south of Airley’s Inlet are two awesome stretches of beach called Fairhaven and Moggs Creek. I’d suggest this could be a good spot to use as a base.

OTWAY LIGHTHOUSE | I am not obsessed with lighthouses (although they are cool). In fact this one (south of Apollo Bay) wasn’t worth the drive – on arrival you are asked to pay $19.50. No thanks. However what WAS worth the drive through Otway National Park were all of the wild koalas we spotted! Aww. Why are they so fluffy when it’s so damn hot? Plus the smell (of the eucalyptus trees, not the koalas) is amazing and it’s a lovely winding sun-dappled route through the forest.

Also check out: heading south is a fab lookout at Glenaire. Kennett River is also a renowned spot for koalas, but this area and Wye River were sadly most heavily affected by the 2016 Bush Fires.

12 APOSTLES | but it’s why everyone takes a Great Ocean Road trip in the first place, right? Well it shouldn’t be. Yes, the 9 (maybe…) that are still standing are definitely a spectacle. They make a great Instagram post #apostleselfie. However, I think the mostly inland last leg (if heading south from Apollo Bay to the 12 Apostles) is the most tiring, and dare I say boring.

On arrival at the Apostles you meet the stock standard tourist car park and a multitude of people marching to the limestone towers. Positively – and surprisingly – it’s free, however I’d happily pay an entry fee if they’d get rid of the bloody flies! So. Annoying.

BELLS BEACH | I was underwhelmed by this legendary surf beach, which is home to the yearly Rip Curl Pro tournament as well as famous – in name only – as the final scene from movie Point Break. Yew. I think we hit a quiet day where surfers were obviously catching waves elsewhere. I’d be up for going down on a competition weekend.

COLAC AND SIMPSON | as we were driving a round trip from Melbourne, it seemed to make sense after the 12 Apostles to take a quicker, alternative route back to Lorne via the inland. This happened to coincide with a heatwave day reaching 40+ degrees, so it felt like we were not far off cooking in the little hire car or standing under a hot hairdryer if you stepped outside. This route was ‘interesting’ in that we got to see a totally different side of very agricultural Victoria, but there are certainly no significant points of interest!

Also check out: Birregurra was quite cute and restaurant Brae is meant to be well worth a visit if you book in advance.

FORREST | is an inland town that’s reportedly gaining some serious traction on the tourist trail. There’s the Forrest Brewing Company (although beer’s not a fave tipple) as well as dawn and dusk canoe tours along Lake Elizabeth to see platypus. Platypus!

AND KNOW THIS: Your Great Ocean Road trip is also honouring the world’s largest war memorial. Returned soldiers from WW1 laboured over this scenic route between 1919 and 1932, connecting once isolated settlements along the coast. You can’t miss the arch just south of Moggs Creek, Airley’s Inlet.