Cool Stuff to Do in Richmond and Cremorne, Melbourne 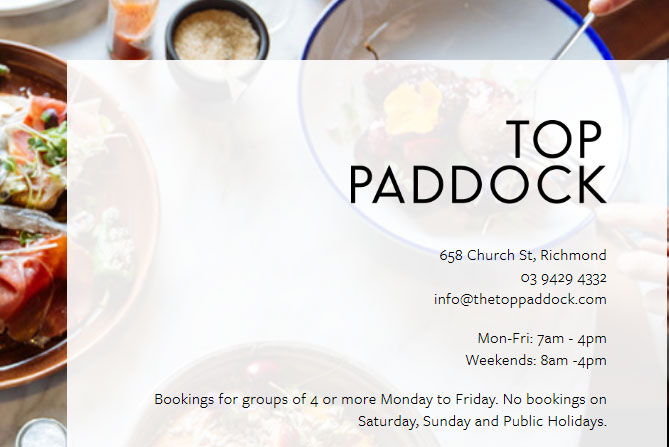 Liz Stark continues her Australian travels by attempting to cram visits to 65 Melbourne cafes into her last few weeks in Oz. Oh there’s sport and history and even a plant nursery to explore too, but Richmond and Cremorne mainly mean fantastic food in glorious surroundings…

I have been looking forward to writing this post as we have been living in Richmond and Cremorne for the past 8 weeks, and will stay here for my final month in Melbourne, Australia. It’s been such an amazing suburb to call home. Whilst Richmond doesn’t rank as well in the ‘cool league’ as Fitzroy and Collingwood it still has loads to offer: it’s a huge and diverse suburb, ridiculously centrally located and – as you’ll read – it is home to some of my all-time favourite Melbourne travel spots.

Little Cremorne, brimming with cafes, shouldn’t be overlooked either (although even Melbournites often look at you blankly until you say, “the bit just south of Richmond Station”). It sits smugly alongside Gosch’s Paddock as well as the Botanical Garden’s Tan Track.

SPORT | who’d have thought I’d put this first as one of the best things to do in Richmond and Cremorne?! However, take my word for it – and this is coming from someone who doesn’t support or even watch ANY sport – you will find it hard not to feel swept up in the team passions pulsing down Swan Street. Central Melbourne is blessed with easy access to the MCG (for AFL and cricket), AAMI stadium in the Olympic Park (rugby and English football) as well as the Rod Laver Arena in Melbourne Park for summer tennis.

BRUNCH | who’d have thought I’d put this first as one of the best things to do in Richmond and Cremorne?! However, take my word for it – and this is coming from someone who doesn’t support or even watch ANY sport – you will find it hard not to feel swept up in the team passions pulsing down Swan Street. Central Melbourne is blessed with easy access to the MCG (for AFL and cricket), AAMI stadium in the Olympic Park (rugby and English football) as well as the Rod Laver Arena in Melbourne Park for summer tennis.

Also check out: Cheerio, Hellas Cakes and LSX are all decent on Lennox Street; 3 Lives on Chestnut Street does tasty lunchtime wraps.

INDUSTRIAL HISTORY | I stumbled across this Melbourne Blog and have been fascinated by in-depth posts on the city’s history, that particularly take inspiration from ghost signs and old maps. Cremorne is an area steeped in industrial history and you can observe evidence of this through long-standing buildings including the old NYLEX and Victoria Bitters factories near the Yarra River; Rosella preserves near the Cherry Tree Hotel; Slade Knitwear from the 1970s; and the huge Bryant and May matches factory, whose tennis courts were built in the 1920s for their workers to enjoy.

LITTLE SAIGON | if like me you love Vietnamese food then Richmond is the suburb for you! (or Footscray has tonnes of options too). Victoria Street in Richmond is the home of Vietnamese supermarkets and great casual restaurants. They serve up the freshest and tastiest ingredients, usually with a BYO booze option too, which keeps a meal out ludicrously cheap. There is also the annual Lunar Festival which in 2016 celebrated the Year of the Monkey.

Also check out: a regular cheap-eats place of ours is Love PHO on Swan Street – you can do BYO and eat for around $10 per person.

GLASSHAUS | this gorgeous plant nursery and event space on Cremorne Street makes me smile every time I walk past it. It’s a lush jungle as soon as you step inside and is a real contrast to what is really quite an ugly grey concrete street outside. They also have an equally cool garden centre on Stanley Street, Richmond.

THE GREAT BRITAIN HOTEL | a lot of the pubs in the heart of Richmond and Cremorne are pretty mainstream – think big sports bars (see point 1!). Reluctantly at first – due to the huge picture of Winston Churchill outside – we found a happy spot at the Great Britain Hotel on Church Street. It’s got a great backyard area, cosy spots inside or a welcoming bar to perch at.

Also check out: Other pubs we’ve found are the Royston (great Wednesday pub quiz); the Mountain Goat Brewery (only open Wed and Fri); the Corner Hotel where a lot of bands play; upstairs at the Richmond Club Hotel; the London on Lennox if you’re really trying to muscle in with the locals.

BRIDGE ROAD | as mentioned, Richmond and Cremorne together make up a large area in East Melbourne and there are several big main roads cutting through or framing these suburbs (horizontally Victoria Street, Bridge Road, Swan Street / vertically Burnley Street, Church Street, Hoddle Street). Bridge Road as you venture to the East is better, but you’ll find an overwhelming number of outlet stores here. Great if you want some cheap BONDS undies or a Country Road weekend bag like the rest of the country.

HODDLE STREET | which turns in to High Street as you journey North past Clifton Hill and Punt Road – aka C*nt Road – as you head South over the Yarra River, is a nightmare. The aforementioned nickname says it all. Melbourne city has some serious traffic issues and this major thoroughfare is no exception. Prepare to sit and wait in queuing cars at most times of the day.

VICTORIA GARDENS | this is a bizarre dated shopping complex at the far end of Victoria Street that seems to be rattling around in its own shell at a loss with what to do. As well as a Coles and KMart, there’s also a Hoyts Cinema that was spookily empty when we went midweek. Perhaps this place will get a facelift as new apartment blocks pop up in Abbotsford just across the road.

TOUCHWOOD | with exactly one month left living in Melbourne (having explored the city and Victoria pretty thoroughly already!) I feel I’m on a countdown of the must-see places. As such I found this list of 65 cafes to try and there’s still a few in Richmond and Cremorne I’ve not been to. Friends have recommended Touchwood so I’m keen to swing by first. Otherwise there is still Friends of Mine, Fifty Acres, Richmond Hill Cafe & Larder and Patch (opposite Bendigo Street Milk Bar).

AND KNOW THIS: a cool mural on Green Street has been painted by Hayden Dewar in 2003 for the 150th anniversary of Dimmeys. It depicts the history of Richmond and Australia and features lots of AFL characters well-known in this country. Read the full details at Melbournecircle.net – it’s a really interesting post.

Liz Stark has been passionately exploring the world for over a decade, inspired by nineteenth century explorer, photographer and naturalist Isabella Baird. She even named her own blog after her: Fly Isabella.

Liz studiously seeks out the must-dos, the worth-a-looks and the don’t bothers in an effort to see everywhere worth seeing at least once during her lifetime. So far her travels have taken her to Thailand, Bali, Singapore, Sumatra, Cambodia, Laos and Vietnam. And, of course, we’re following her Australian travels avidly…